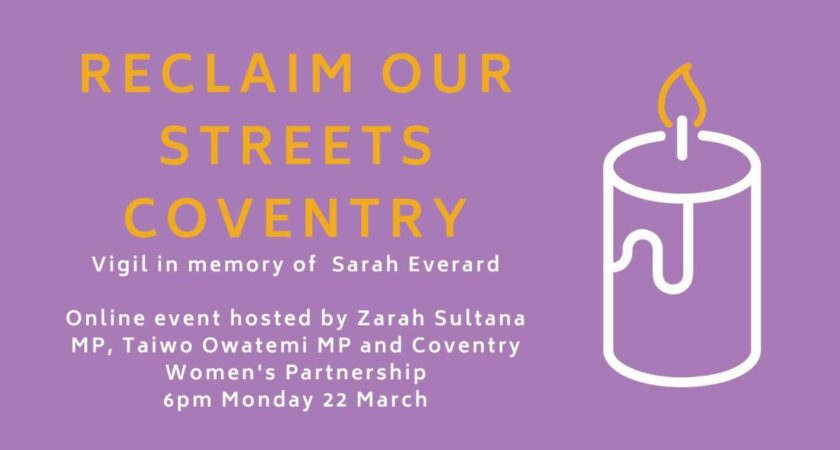 CRASAC were privileged to be part of an online Reclaim Our Streets event hosted by Zarah Sultana MP, Taiwo Owatemi MP, and Coventry Women’s Partnership. In her speech, CRASAC’s Deputy CEO highlights the importance of women’s voices and a society that needs to change.

“The death of Sarah Everard, a young woman attacked by a serving male police officer as she walked home has shocked the nation, and as we gather here tonight in her memory our thoughts go out to her family and friends.

“The outpouring of grief and anger over recent days that we have seen in the media and on social media has been immense. Sadly we have also seen the backlash predicted – attempting to silence women’s voices and the same old question that always pops up when women’s issues are discussed…. what about the men?

“If we cannot acknowledge that gender based violence exists and that some men do abuse, then we cannot look to examine the cause and address it successfully.

“When we know that one in four girls will experience childhood sexual abuse (and one in six boys) and that one in five women over the age of 16 have experienced some form of sexual violence, we need to stop brushing the problem under the carpet and shout it from the rooftops until we are heard, because it is everywhere.

“In order to bring about change we need men on board, to accept the extent of the problem so that instead of blaming women we address the real problem of why those men are abusing. This is not a ‘guilty by association’ issue. By acknowledging that some men abuse, does not mean that you are signing up to say all men abuse.

“The murder of Sarah has highlighted the issues that women in society face every day whilst navigating a system that victim blames at every juncture, on so many levels.

“A society that tells women and girls to change our appearance, what we wear, where we go, and how much we should drink in order to stop ourselves being raped, attacked or murdered. Instead, we should be turning the lens on the perpetrator and his behaviours and examine his responsibility not to abuse or kill.

“We live in a society where whilst reports of sexual violence and abuse are increasing, rape prosecutions taken forward by the CPS stand at an appalling 1% and the likelihood of a successful conviction based on the victim being ‘the right kind of victim’, in the eyes of a jury.

“So, she can’t be too attractive or sexy or they think ‘she was asking for it’. But not too plain ‘she’s not attractive enough for someone to want to rape her’. Not too angry or defiant ‘she’s too strong to be raped or abused’. But not too distressed ‘she’s acting and putting it on’.

“We live in a society where essential services for women and girls (we do also provide services for men and boys) are desperately underfunded by central government, and at CRASAC we now have a waiting list of over 380 people trying to access specialist therapy due to their experiences of sexual abuse and sexual violence.

“We live in a society that is failing women and girls and this must change.”